Donna Price is an Asheville, NC based sculptor and Juliane Leitner is a ceramicist living and working in Altmünster, Austria. Price’s work was included in a three-person exhibit at Abecedarian Gallery last fall. Leitner has not previously exhibited in the US. They collaborated last month during Juliane’s month long visit to the States on Lifelines. About this piece they say: (Julia) In 2008 I started working with “Kluppen,” the Austrian dialect expression for wooden, hand-carved clothespins. The region I grew up in has a 450-year-old carving cottage industry; the “Kluppen” carvers were considered to be the lowest of the carvers, and so also the poorest.  In my 2008 installation, “Kluppenklang”, I elevated and honored “menial” employment, such as carving “Kluppen” (in the past) and assembly line work (in the present) to a higher level by recasting it in porcelain.

(Donna) ‘Lifeline’ rapidly evolved from the gift of 14 porcelain clothespins into collaboration with Julia Leitner.Our discussions resulted in images, ideas and associations of what a clothespin represents in society, past and present. Julia’s original project involving these porcelain clothespins had also explored similar phrases and associations from the Austrian perspective. An intensive German to English and English to German translating session resulted in the phrases on each ‘clothespin’.

The image of the clothespin, and how it relates to life-relationships, holds both negative and positive connotations. It literally becomes a lifeline of how we relate to one another as human beings…our needs, our desires, our fears and our exploitations.

Evan Jensen is an illustrator, designer and printmaker living and working in Annapolis, MD. On exhibit are  intaglio prints incorporating both printed and handwritten text. This is the first Denver showing of his work. 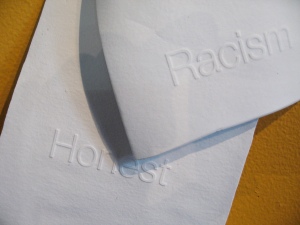 Gail Watson is a letterpress printer and book artist. She maintains a studio and residence on the Peak to Peak Scenic Byway near Rollinsville, CO. Her work is frequently included in group shows in the Denver Metro area. Last fall, during a residency at Platte Forum, Gail began a project casting letterpress wordforms in earthenware. Exhibited in Words Works are a continuation of that project.

Heidi Zednik is an Asheville, NC based visual artist and writer. She is currently represented by Abecedarian Gallery and was the focus of a 3-person exhibit last year. Zednik has become increasingly interested in the actual process of each piece –  how to hold the essence of thought, line or color at its moment of creation. These pieces of pigment and thread on used chemex coffee filters heavily impregnated with beeswax initially appear minimal or fragile, yet in time reveal the strength of poetic practice. Her pieces in this exhibit are a continuation of a reoccuring theme – the tensions of growing up in two countries and were begun during 2005 visits to her home town of Altmuenster, Austria then finished this year. 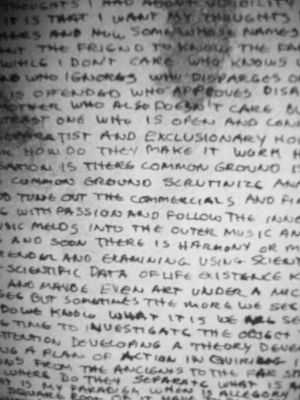 Joan MacDonald is a mixed media artist and long-time member of Edge Gallery in Denver. She lives and works in Pine, CO. Her work was included in Interweavings at Abecedarian Gallery last year. On exhibit are selections from First Draft: A life deconstructed through writing in the genre of the William Burroughs, Anais Nin and Andy Warhol diaries. “First Draft” was begun in September 1999 as an outlet for the thoughts that are continually flowing through one’s conscious and unconscious mind. Similar to Jonathan Borofsky’s “Thought Books” and his counting works, the words and thoughts that unceasingly flow are acknowledged and recorded. MacDonald has chosen to track the subconscious coming into consciousness onto paper. Thoughts, partial thoughts, memories, observations, reflections, dreams, events and automatic writing; the prosaic to the profound, are all woven together into over eighty word pictures. The words are written on Rives BFK paper in pen and India ink with an ink wash background.

Katie Taft is a Denver artist (currently a member of Sliding Door Gallery) best known for the sculptures she creates and places in a variety of circumstance and then photographs. For Words Works she has crocheted more words – her first crocheted words were exhibited in the Interweavings exhibit). Guilt, gilt, guild, geld and guile crotcheted from a linen rayon blend are gold in color and exhibited on a paper-cut backdrop. About words Katie says I used to be afraid to put words in my work, fearing that the visuals wouldn’t stand on their own, that if it needed explanation I hadn’t done it right. But these days words come much easier to me they not only convey information, literally, but also visually and materially. In this work the word is the art both in body and in spirit.
Katie  was taught to crochet by her grandmother in 1980. Katie can be commissioned to crochet other words.

Kimberly MacArthur Graham is a Denver painter regularly shown at both commercial galleries and art centers across the Western US. In 2004 she began a year-long collaboration with writer Kathryn T. S. Bass on the Within/Without series. "For a year, every few weeks I met with poet Kathryn T.S. Bass to exchange paintings and poems, reflect upon our experiences as artists and women, and share tea. I painted panels that responded to her poetry, and she wrote poems that responded to my paintings. Within/Without is the intertwined result of our conversation, which centered on issues of creativity, fertility, and feminism. Over the course of the project, we grew as artists and as friends." The four remaining panels available from this series are on exhibit.  Copies of the Within/Without catalog are also available.

Kirsten Vermulen is a Denver area musician and visual artist, currently working with Itchy-O. Her work was included in Transparent/Opaque at Abecedarian Gallery last spring. For Words Works she created a bird does not resemble an egg. Developed in response to a poem by the 13th century Persian poet, Rumi, the panels reflect an indefinite middle, between beginning and end, idea and outcome, egg and bird and the relief found in soft deliberation. 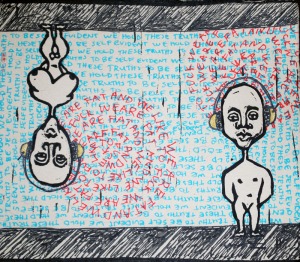 Lara Schenck is a printmaking student at University of Colorado, Boulder. Her work has been shown locally at Inklounge and at Core. A triptych of drawings and wall mounted tri-fold book from her No Do I series.

Melissa Duckworth is an MFA candidate at Cranbrook Academy of Art in Michigan. Her installation Love in Four Pieces was exhibited last year in the Denver metro area at both East End Applied Arts and Abecedarian’s Interweavings show. More selections from that series are included in Words Works.  The ability for readers to interact with a book in a meaningful way, and through that interaction to be engaged viscerally with the text is the main thrust of my work in the book arts. "Love in Four Pieces", explores the voyeurism and exhibitionism that has become so prevalent in youth culture today, as well as the exploitation which exists within even exclusive relationships. The work as a whole is nuanced in its redundancy, a reflection of the confessionalist poetry which was the inspiration for the book and installation.

Rachel Hawthorn is a Denver mixed media artist and is currently a member of Sliding Door Gallery. This will be her first time exhibiting at Abecedarian. On display are selections from the Family Secrets portfolio. Although photographically produced, the pieces are word rather than image based.

These images represent a collection of family photographs as they might be displayed on a wall in the living room or hallway of a home, with generations of the family joining together in the display. Unlike the happy moments that are captured and displayed on a wall, however, these text based pieces represent the unspoken issues, thoughts, struggles and negative interactions of the family, the dirt secrets, hidden dramas and other things in the past that aren’t so picture perfect. 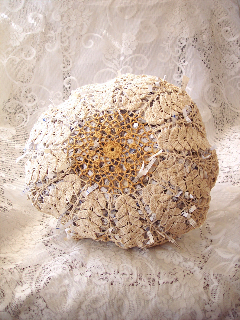 Sue Ann Rische of Lubbock, Texas teaches at Texas Tech University. Her studio work is primarily in metalsmithing and drawing. Her work was included in Transparent/Opaque at Abecedarian Gallery. in Words Works are exhibited sand-blasted teacups based on tea-reading ritual and a grouping of open-weave, crotcheted pillows stuffed with various religious texts.

Tate Foley is an MFA candidate in printmaking at University of Georgia in Athens. His work is numerous private collections and widely exhibited. This is the first showing of his work in Denver. Here are exhibited screenprints paired with found print in a series of diptychs. Text is ubiquitous. It is misspelled, perverted, and reused to reflect subliminal messages, hidden meanings, and subconscious thoughts. Read as headlines and advertisements, text works to sell not simply ideas, but new thoughts about ideas, beliefs, and modern concerns.

My work aims to thrust the viewer into divergent thinking and nostalgic recollection, while keeping the work lighthearted. I am interested in the use of narrative to convey memories about a person, and the play on narrative to create blithe situations for the viewer to relate and react to.